Well, it was about time the B got itself across the Channel.

It was a little last minute and wasn't the longer stint into the depths of France I really wanted to do, but then I was a little uncertain about the B's reliability as it hadn't been on the road much recently and as we all know these cars don't like sitting too much.

A look over a map and I remembered that Belgium was host to a museum dedicated to all things Tintin (or more accurately, Herge, his creator). So with a destination in mind a toe-dipping foray into the continent was set up. Bear in mind that being in the high north of England this also involved a full day of travel down to the south coast in order to catch the tunnel train the following morning.

The trip down to the hotel near the tunnel was trouble-free, both from the B's perspective but more amazingly with regard the motorways. The B ran particularly well, feeling fully on-song all the way down. The next morning we jumped on the train and were over the Channel in no time.

We were going to be staying in Ghent which meant a couple of hours along the motorways along the coast and down into Belgium proper. Unfortunately as this is the main route from Zeebrugge to Calais it was busy with goods vehicles and the road had suffered as a result too.

All this was forgotten as we arrived at our hotel, a very nice Holiday Inn near the Expo, where we were able to park under the reception canopy - no lugging bags up from the car park! A quick stop-off and we headed to the museum. The Herge museum is tucked away a little and not really helped by not having a car park outside and being in the middle of the town's road-work zone, but it's a really nice museum and worth a visit if you are remotely interested in the Tintin books. Unfortunately taking photos is not allowed inside, but suffice to say they have a great deal of display items which bring the books to life.

Not too far away from the museum is Waterloo so we made a small detour to visit a few of the landmarks. La Haye Sainte farmhouse was top of my want-to-see list as I'd had an Airfix model of it as a kid. The farmhouse is privately owned now and not open to the public and sits on a busy road so you can only really view it from across the way, but it looks just like it would have back then and is really a huge structure - that model was way out of scale! There is a pull-in nearby and we parked the B up and walked down the footpath to take a closer look at the various plaque memorials to the factions which fought over the buildings in 1815.

A little further up the road was La Belle Alliance and a bit further still is the Caillou farmhouse where Napoleon spent the night before the battle. This has a pleasant little car park with a statue and gates topped with musket bayonets. Behind La Haye Sainte is the Lion Mound, a huge man-made hill topped with a large lion statue and next to this is what looks to be a new underground museum dedicated to the battle.

The next day we spent in Ghent itself - very pretty and easily accessible from our hotel by tram - and then headed back to Calais the following day. Once back in England we had a few issues with the B, but more on that later. In all this was a great trip, definitely looking forward to the next one. 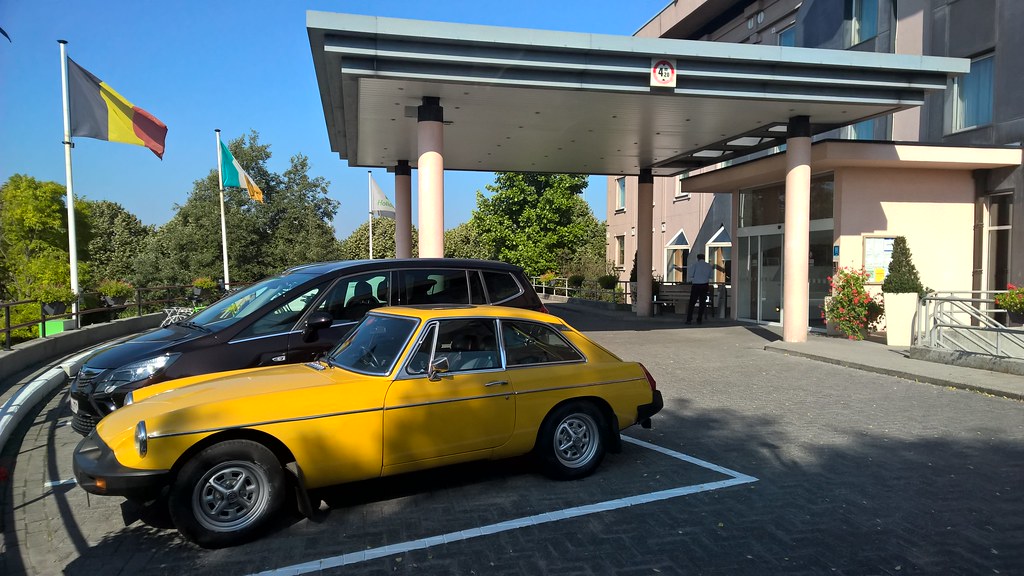