Getting the old wheel off is by most reports a git of a job, made harder by the later models having a collapsible steering column. This means the normal method of giving the steering wheel nut a whack with a hammer cannot be used for risk of having the column collapse.

First up was to get access to the nut under the boss. The OEM wheel has an MG badge in the centre, held in place by a little ridge of the covering rubber material. A thin screwdriver (ideally a micro-driver) allows you to lever the disc out without damaging the surround. Now you'll see the nut which shouldn't take too much effort to undo. Chances are that the wheel will be stuck fast on the splines which keep it and the column aligned.

You now have two options to try and remove the wheel. The first is the 'just pull it' method. This varies from literally just pulling at it, through to applying alternating push/pull force to opposite sides of the wheel, to jamming your knees behind it. If you try any of these, please make sure that you leave the nut on a few turns as when the wheel releases it'll come off fast and could easily leave you with a bloody nose! We did all of these, including injecting WD40 down the splines over several days, without any movement.

The second method is to use a puller. Moss supply the proper tool, but you'll probably only use it once and it's pretty expensive. The other option is to use a hub puller, but the issue with the OEM wheels is that their spoke alignment make it awkward to get a purchase and the rubber coating can easily be damaged. We managed to borrow a two-armed hub puller and added a couple of spars of wood for it to attach to behind the spokes. After the first fitting we added some padding between the wood and the wheel to protect the surface.

The puller did the trick, revealing the splines on the column and the plastic disc which allows the wheel to cancel the indicators after cornering. The boss has two 'fingers' which fit into slots in this disc to turn it. Next up was to fit the new wheel, this one will be going on my garage wall! 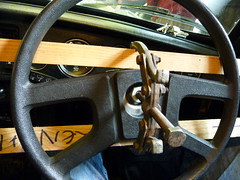 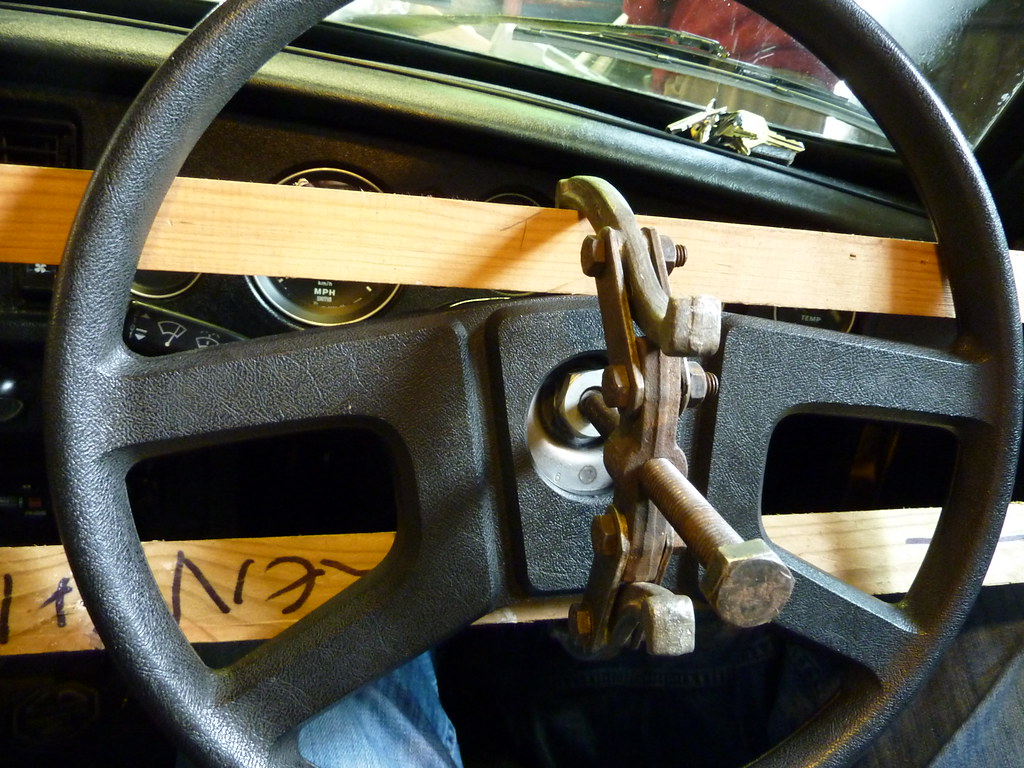